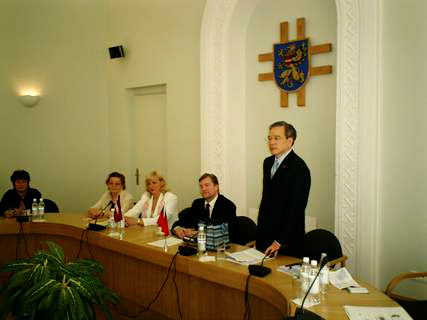 On June 12, 2006, Head of Taipei Mission Ambassador Matthew S. Lee donated, on behalf of the Taiwan International Health Action (TaiwanIHA), 41,000 USD to Rezekne City for the construction of a lift for use by the handicapped in the citys health care center. A donation ceremony was held in Rezekne City Council by Mayor Juris VJAKSE, who in his welcoming speech extended great appreciation to Taiwan and stressed that the donation will bring long-expected convenience to the aged and handicapped patients in the whole Rezekne region. The Mayor promised to complete the project before the end of this year. Hon. Elita Snepste, Chairperson of Latvia-Taiwan Interparliamentary Co-operation Group of the Saeima and Dr. Beatrise ORINSKA, Director of the health care center were present in the ceremony, together with other city council officials and the media.

When asked about the purpose of the donation, Ambassador Lee said that Taiwan, as a country with world-known economic achievements, is willing to contribute to the world as Love from Taiwan. Since its establishment in April 2006, TaiwanIHA has been strengthening cooperation with health and medical institutes around the world, in pursuit of the noble end of the World Health Organizationthe attainment of the highest level of health care for the whole human being. The donation by TaiwanIHA represents friendship from Taiwan to Latvian people. It will not only help the needed, but also strengthen the relations between the two countries. In particular, Ambassador Lee thanked Hon. Elita SNEPSTE for her assistance and advice, and wished the project success. He hopes there will more such cooperation plans in the near future.